THE BUSTLING METROPOLIS OF BUSAN

Living on a rural island means that I'm fairly isolated from the big Korean cities. I don't classify Gwangju as a big city (1.5 million citizens) so if I really want a taste of big city life then I need to look to either Seoul (five hours away by bus), Busan (six hours by bus), or Daegu. None of those are remotely close, so a trip requires a fair amount of planning.
I'd initially wanted to visit Seoul on my own, but one of my American colleagues had kindly offered to let me tag along with him to Busan for the weekend, where he'd be meeting up with a few other friends. It seemed like the logical choice – I'd be going with someone who knew the lay of the land and would also be saving on accommodation and travel costs by splitting it with someone else. So we left the Wando bus terminus on a muggy and humid Friday afternoon at 3.40pm.
Friday
First of all, the Wando to Busan bus ride is a TREK. The bus takes a solid six hours from leaving Wando, to arrive at Busan Sasang bus terminal. This can vary, depending on how much traffic you encounter heading into Busan. Nonetheless, the six hours allows for a solid sleep and catching up on some downloaded Netflix series.
We arrived at Busan Sasang terminus at 21.40 exactly, jumped off and caught a taxi to our lodgings for the weekend. With Korea being right in the middle of summer (and in the throes of monsoon season) the air in Busan was just as heavy and humid as it was in Wando.
From the moment you step foot in Busan, you can feel the big city energy around you. Scores of high-rise apartment blocks punctuate the skyline, flanked by commanding mountains that jut out from all angles. The thick fog and tall buildings give the city a distinctly post-apocalyptic sci-fi feel. To get from the bus terminus to Haeundae, our taxi crossed the Gwangandaegyo bridge that spans the bay connecting Daeyon with Haeundae; a great vantage point for getting a sense of the scale of the city.
We were based in Haeundae, one of the major beach districts in the city. On arrival, there really isn't much to suggest that there's a beach close by, as the high-rise apartments obstruct any views of the ocean, so you have to talk a walk down to the beach to access it. We were close to the main strip (Haeundae Road), which is filled with bars, restaurants and a market down one of the alleys.
Saturday
Feeling slightly worse for wear, we decided to dodge the inclement weather and spend Saturday indoors at the Shinsegae Mall, a veritable shopping mecca. You know how every new shopping mall that's being built claims to be the biggest ever? Well, this one's on record in the Guinness World Records as the largest, and I can attest to the fact that it is HUGE. You can easily spend a solid half day exploring the mall and all it has to offer.
We ended up leaving later in the afternoon, then getting some Mexican food along the Haeundae strip. As with most cuisine, if it isn't native to the country, then it's quite mediocre.
The plans for the evening involved heading to Seomyeong, a shopping and nightlife district towards the west of the city. At this stage the rain was unabating, but we persisted with our plans, finding a few noteworthy spots in Seomyeong. I went my own way to find somewhere to watch the soccer (Argentina vs France) and then headed home. Seomyeong was the highlight of this short trip; whereas Haeundae tries to cater to the tourist, Seomyeong attracts a younger crowd. The restaurants and bars are also far more eclectic, and in some cases just straight-up and unapologetically raw. There's a great selection of food and despite the rain, the streets were still buzzing.
Sunday
The rain subsided but the humidity persisted, which meant that the weather went from being rainy to stinking hot. Even though the mercury didn't go past 28 degrees, it felt more like the mid-30s. A short amble along the Haeundae beach promenade was followed by a quick mission through the Haeundae Market, which for the most part, is a typical market experience.
Given that I had to make the six-hour journey back to Wando, I decided on a 1pm bus, which meant that I would arrive in Wando at around 7pm.
I know for a fact that I've only touched the tip of the iceberg with Busan, and as with most sprawling Asian cities, it's going to take a few visits to really familiarise myself with how the city works. Hopefully I'll get a chance to head back soon and soak up more of what it has to offer. 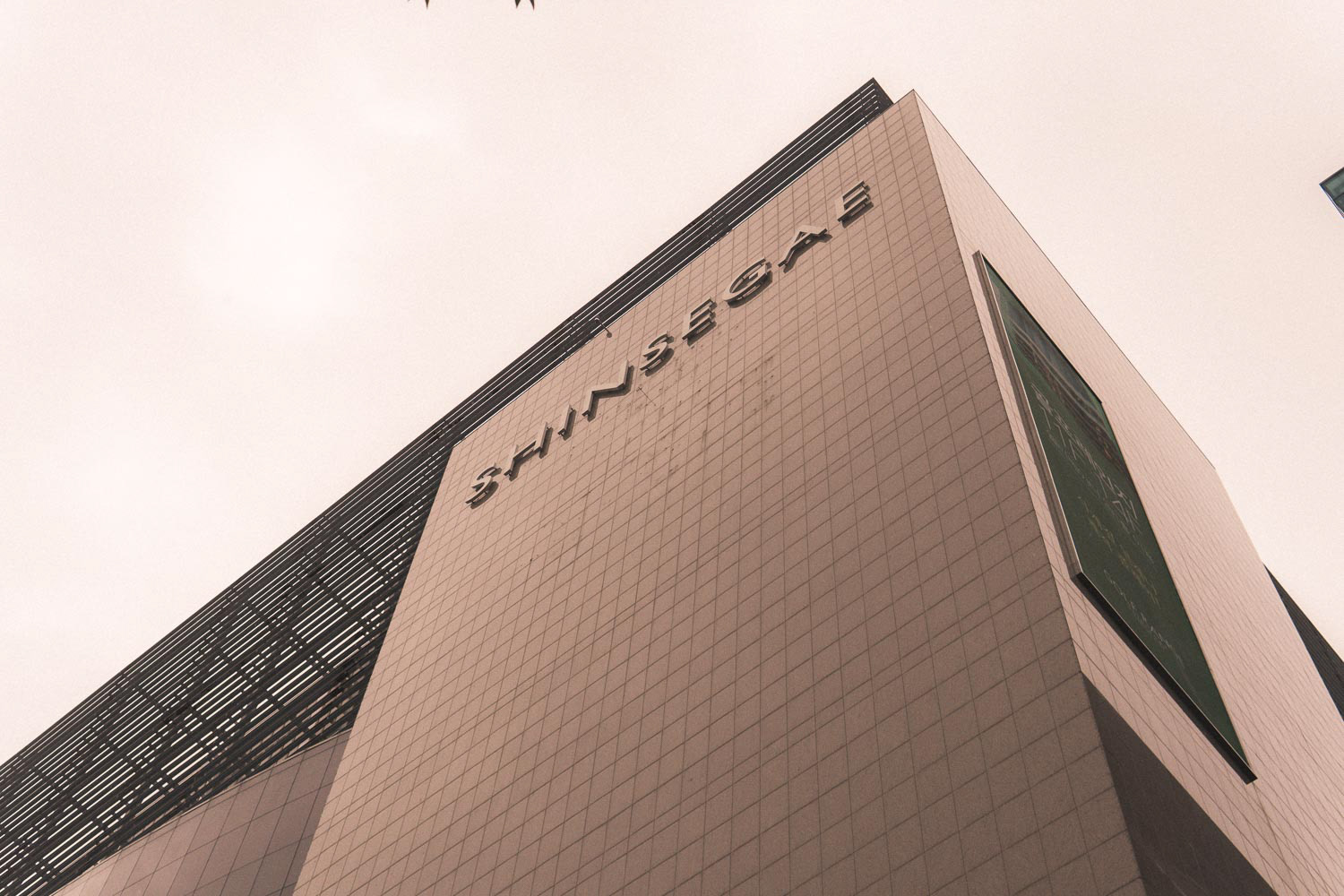 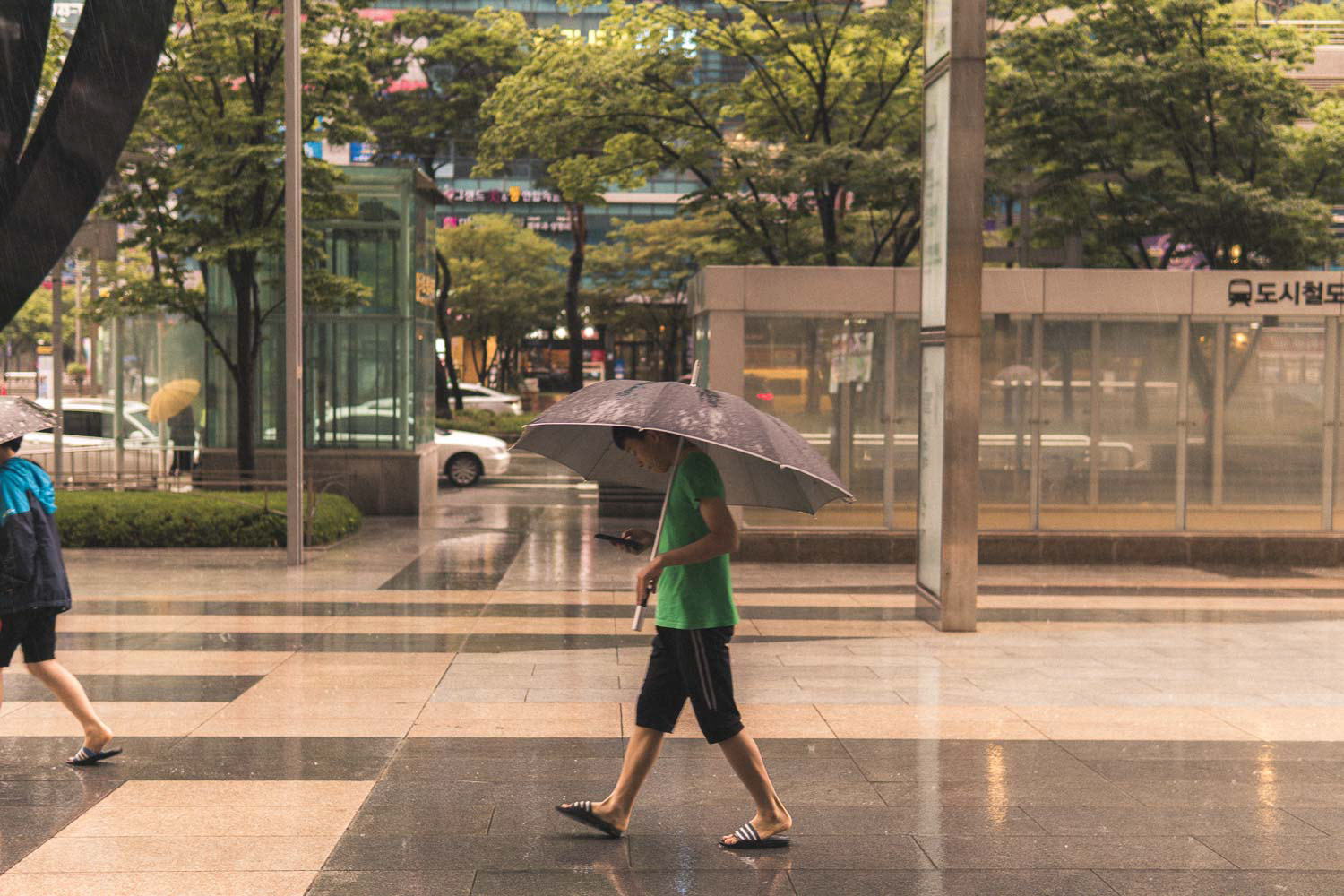 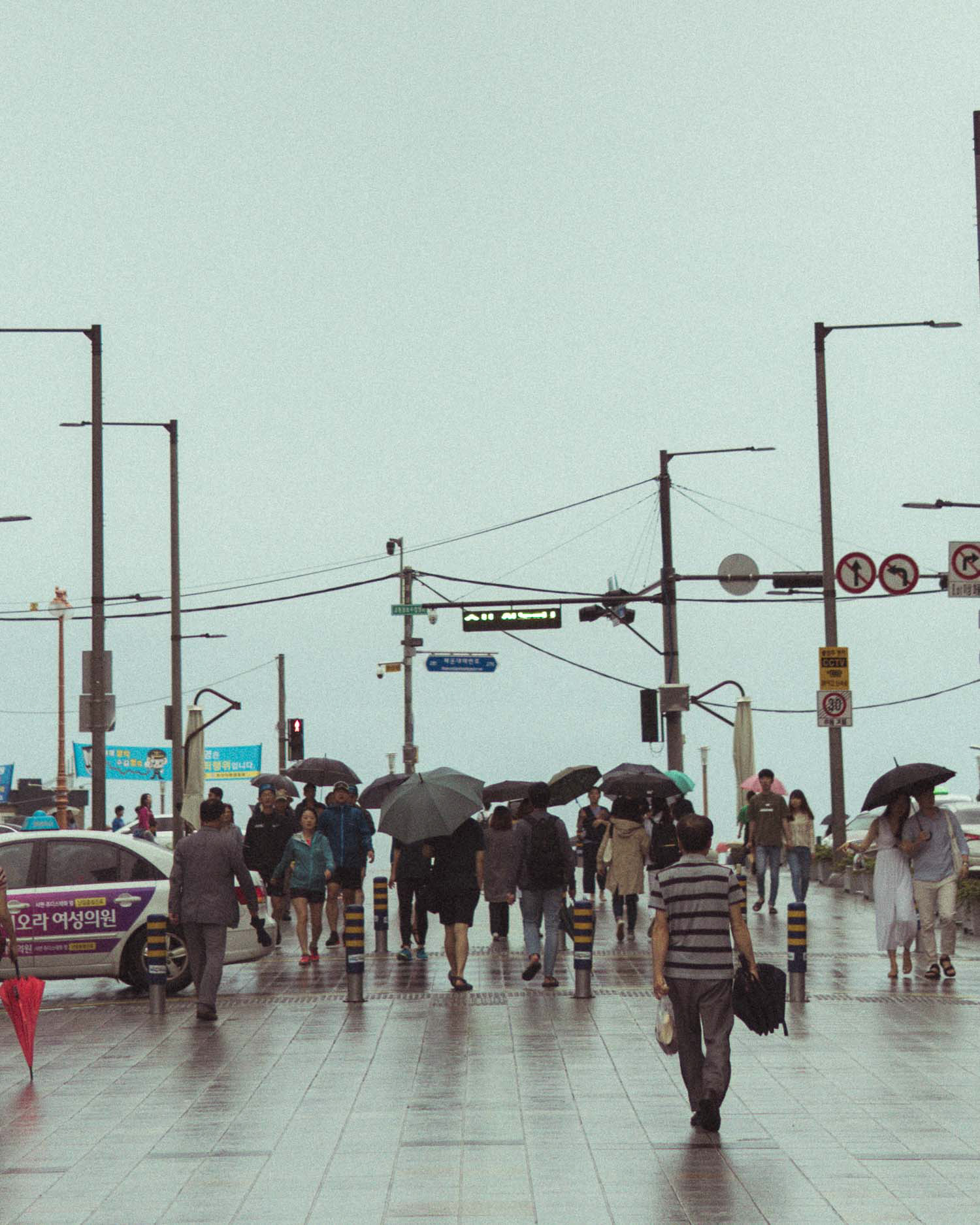 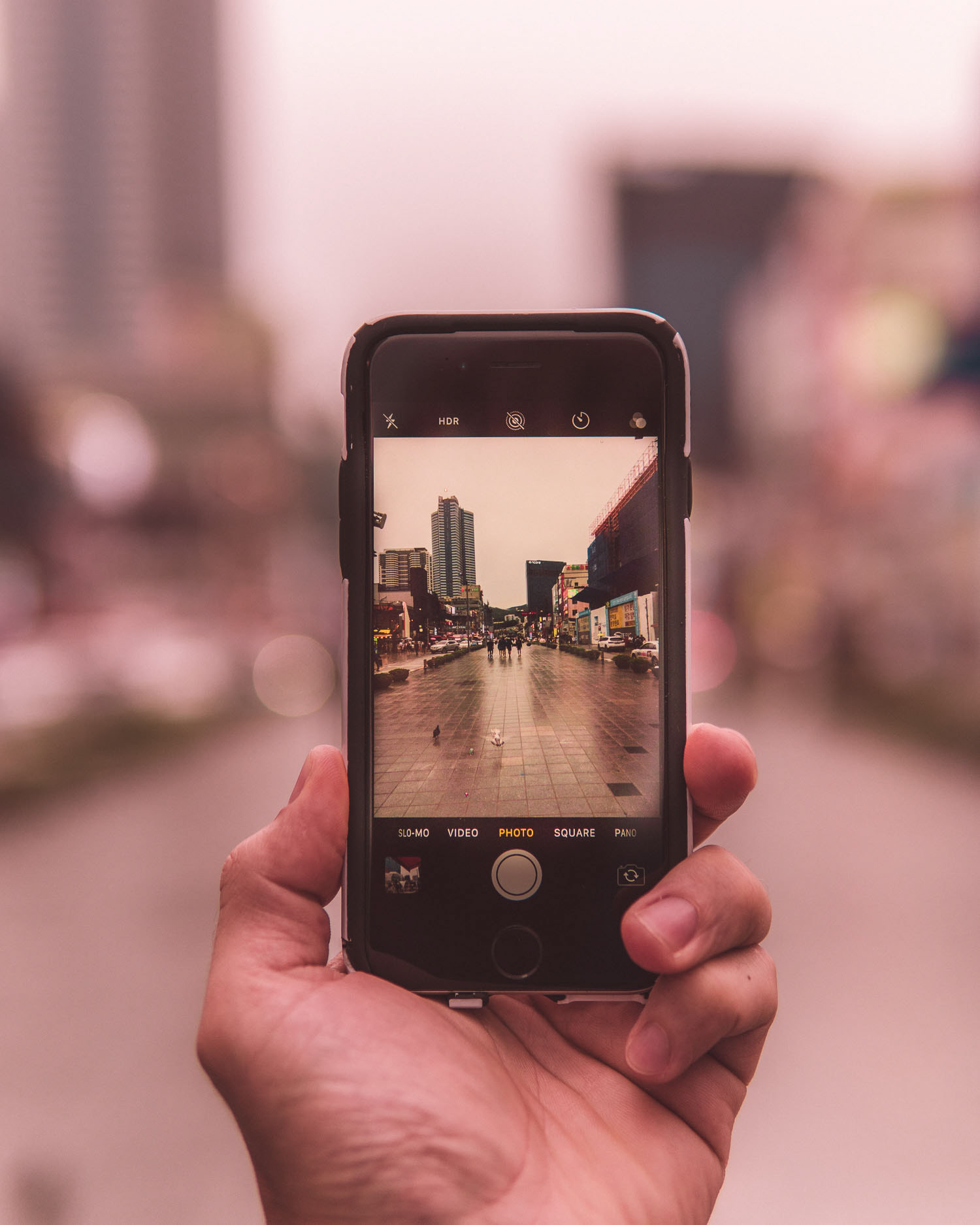 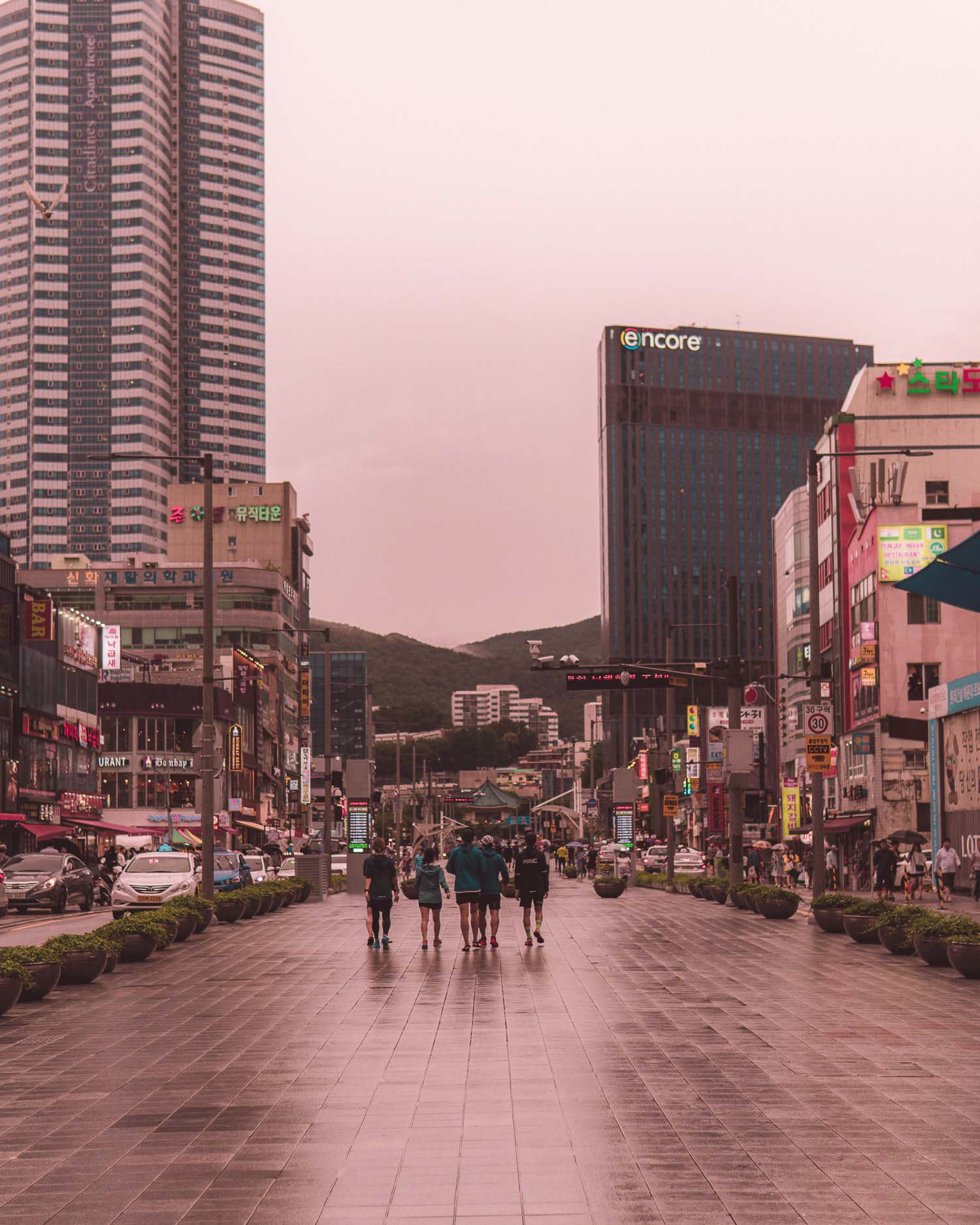 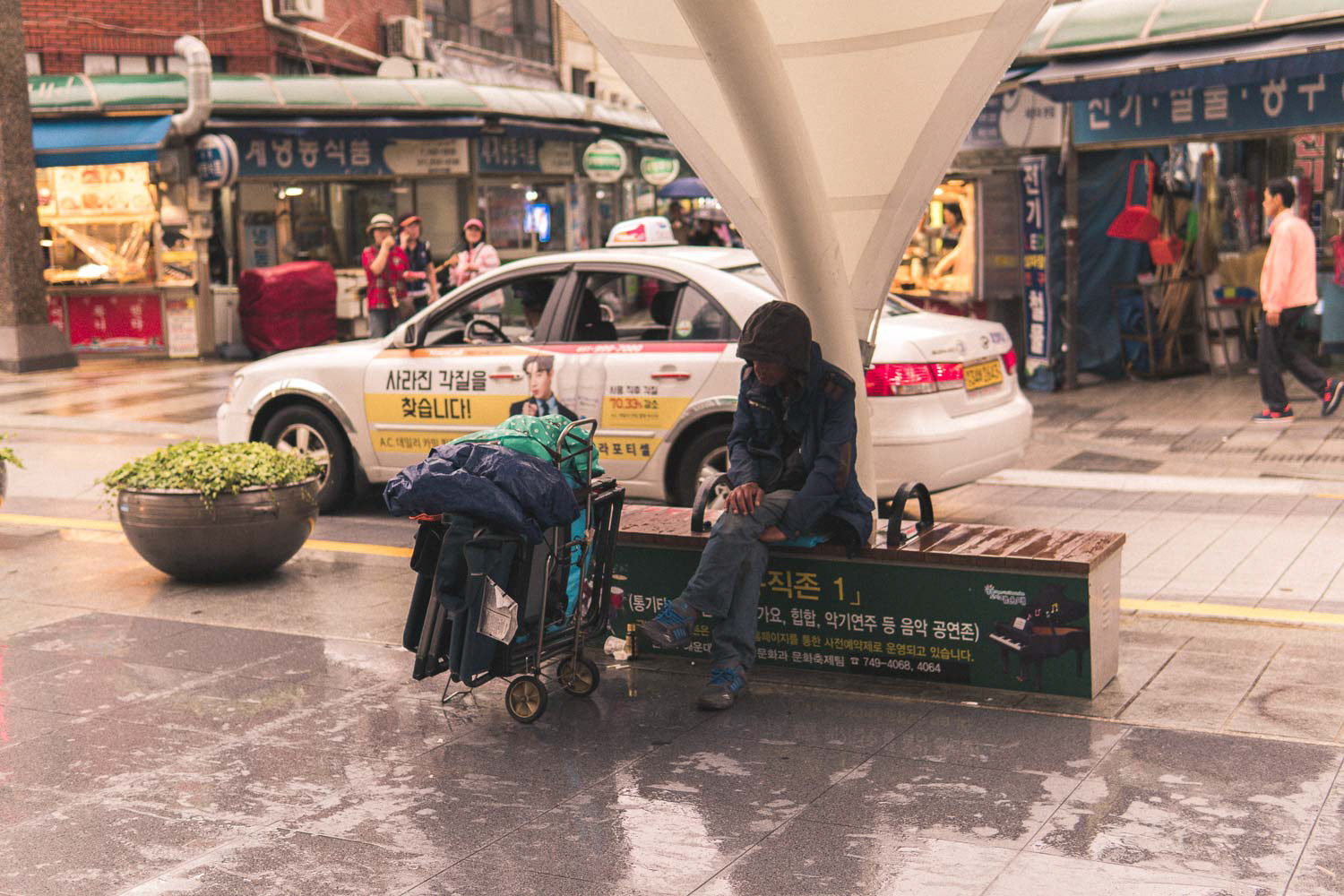 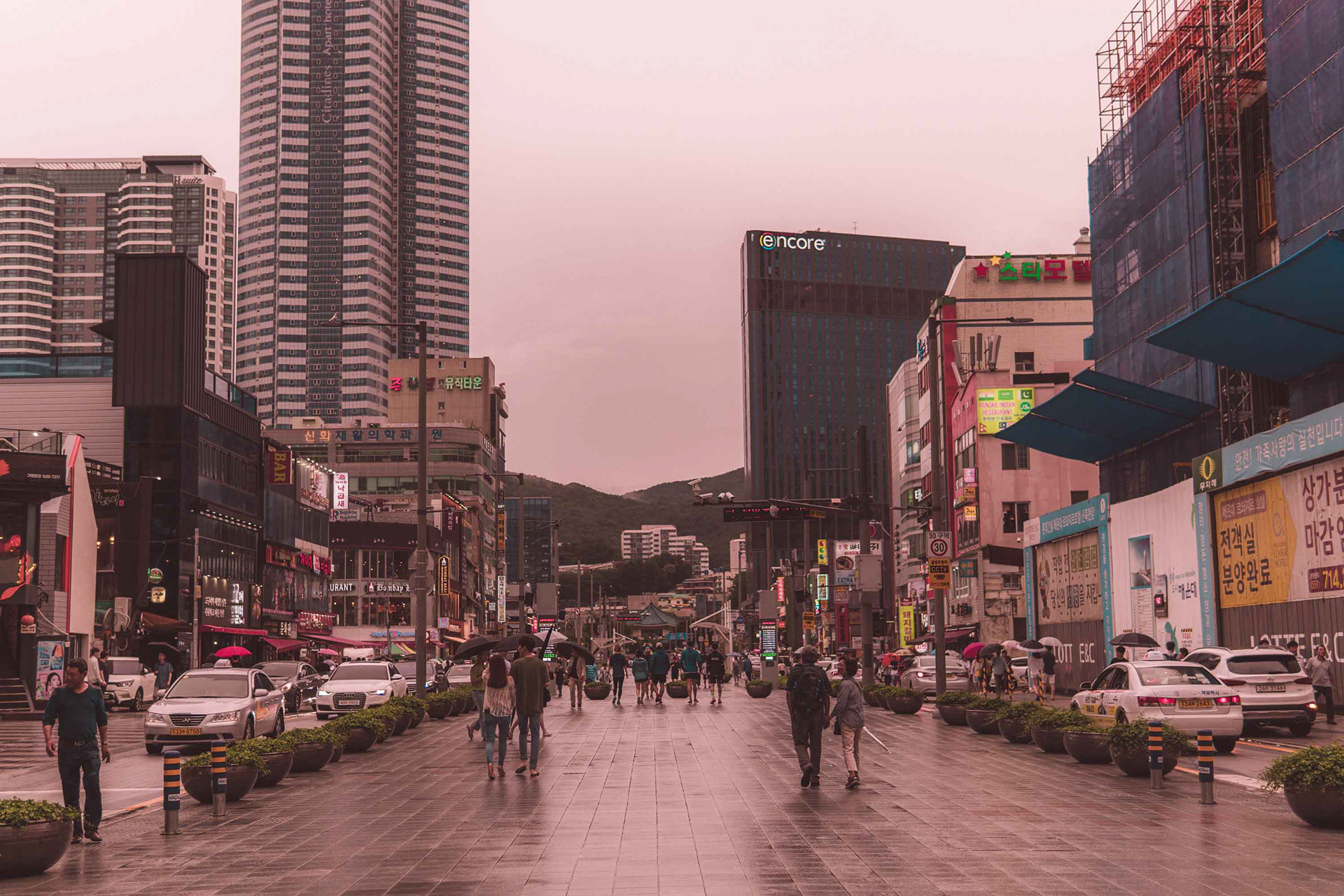 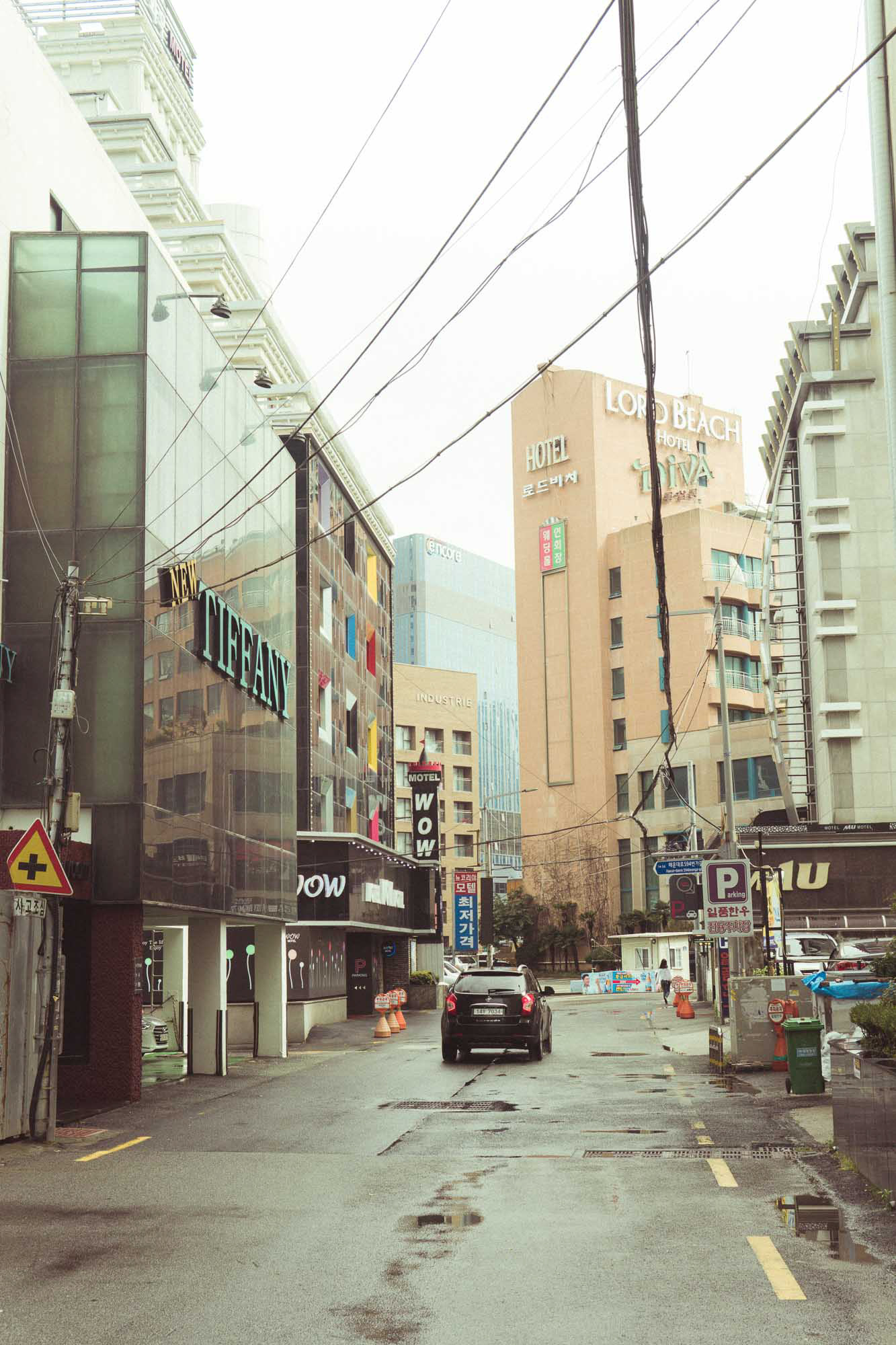 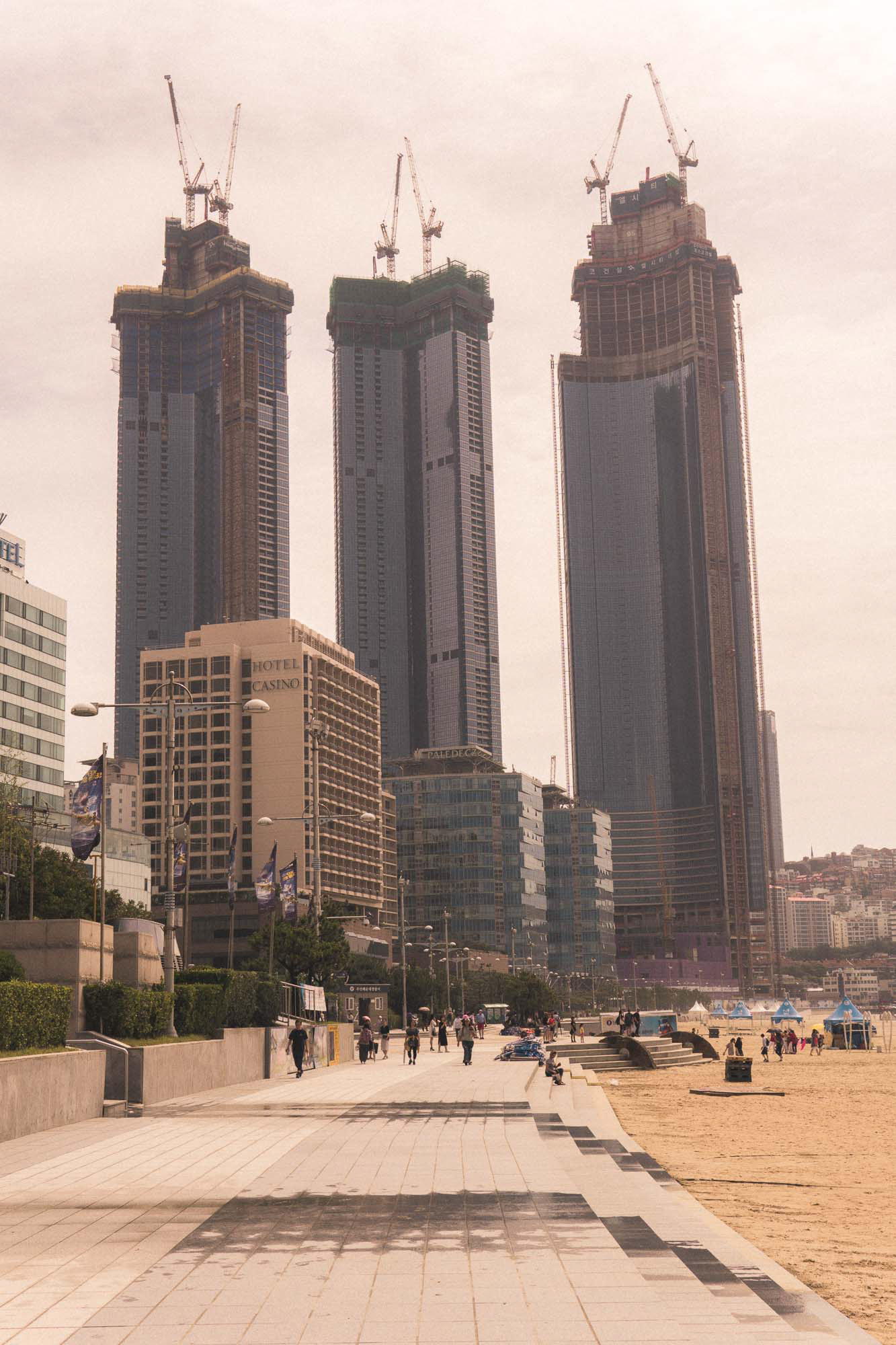 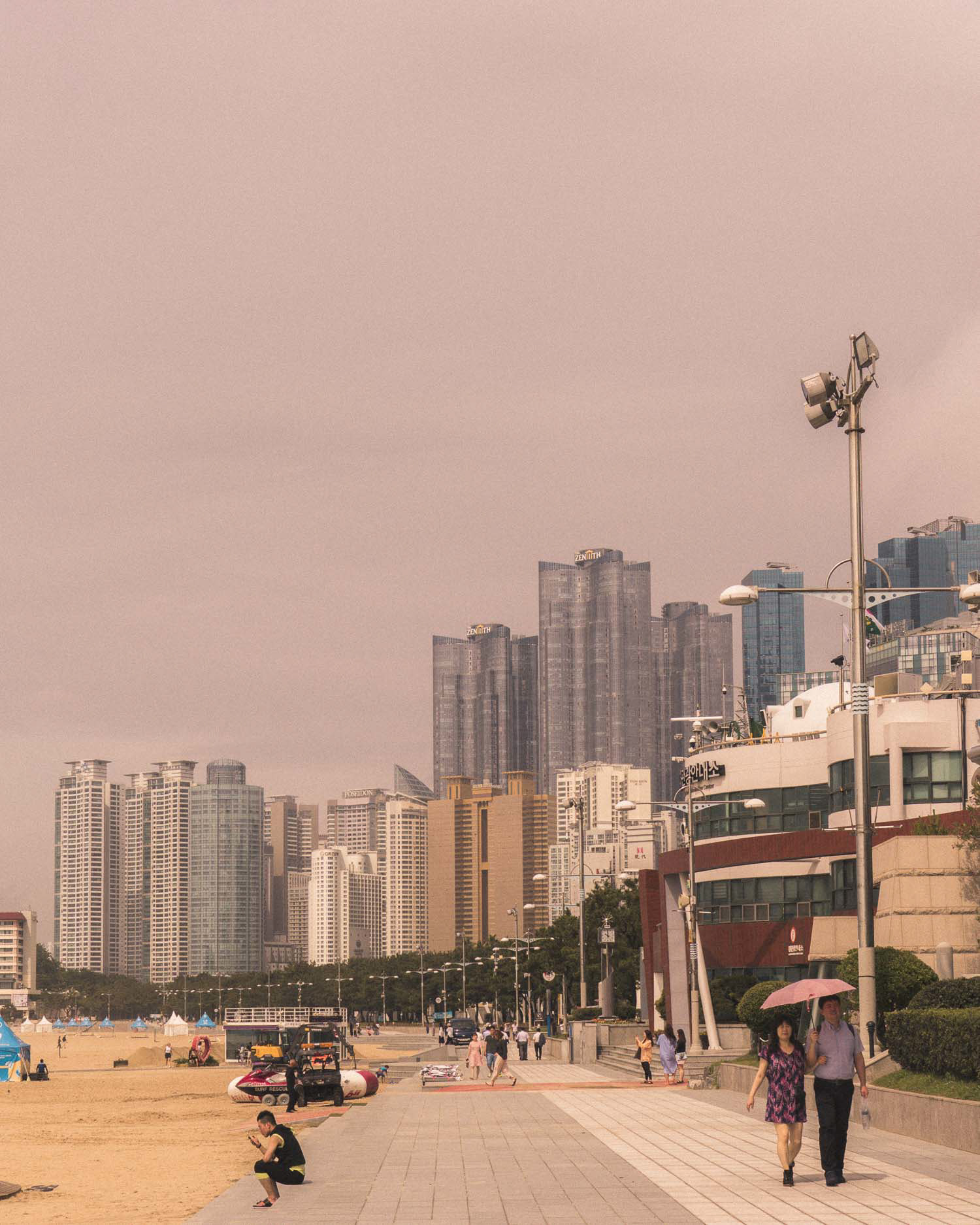 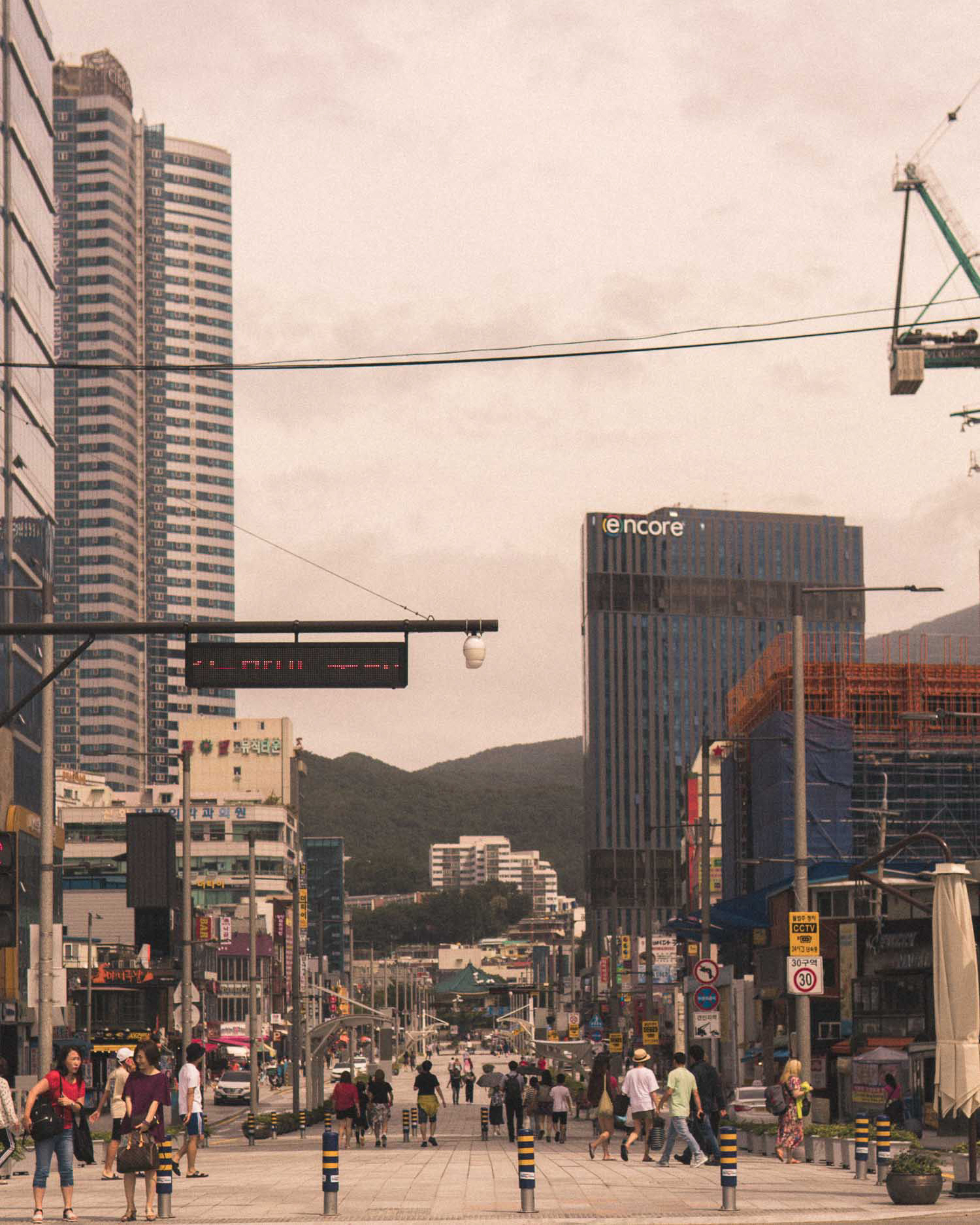 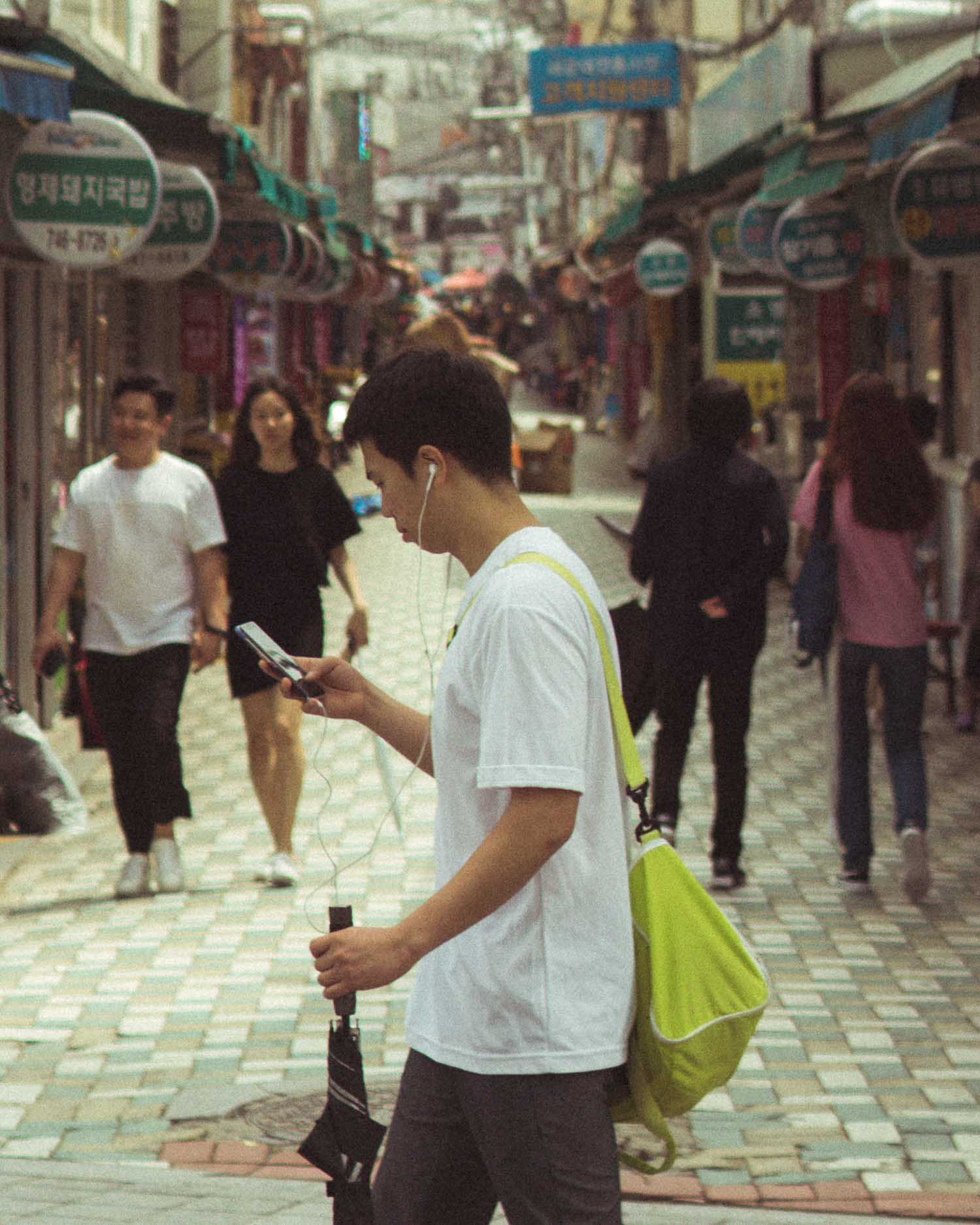 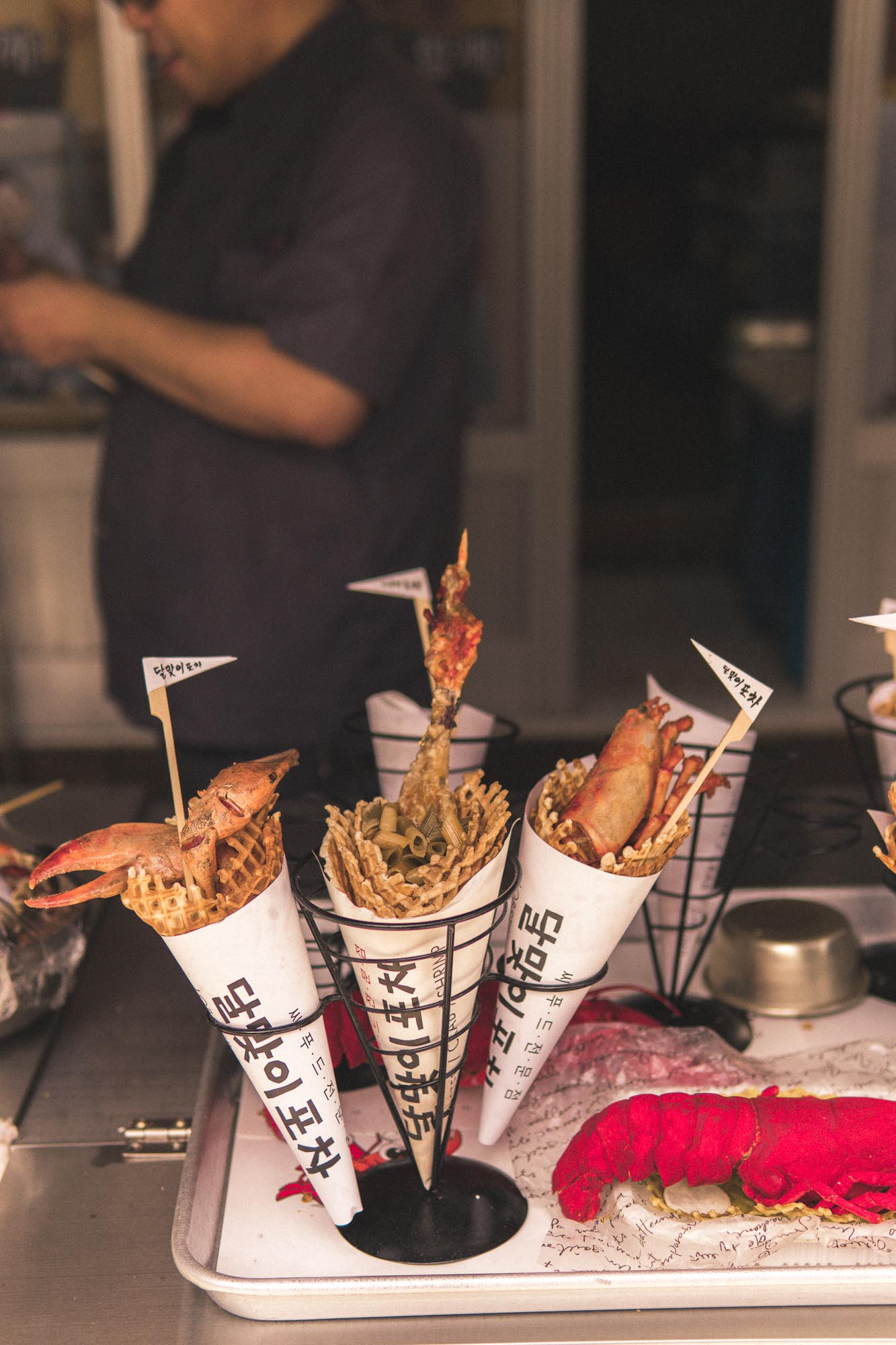 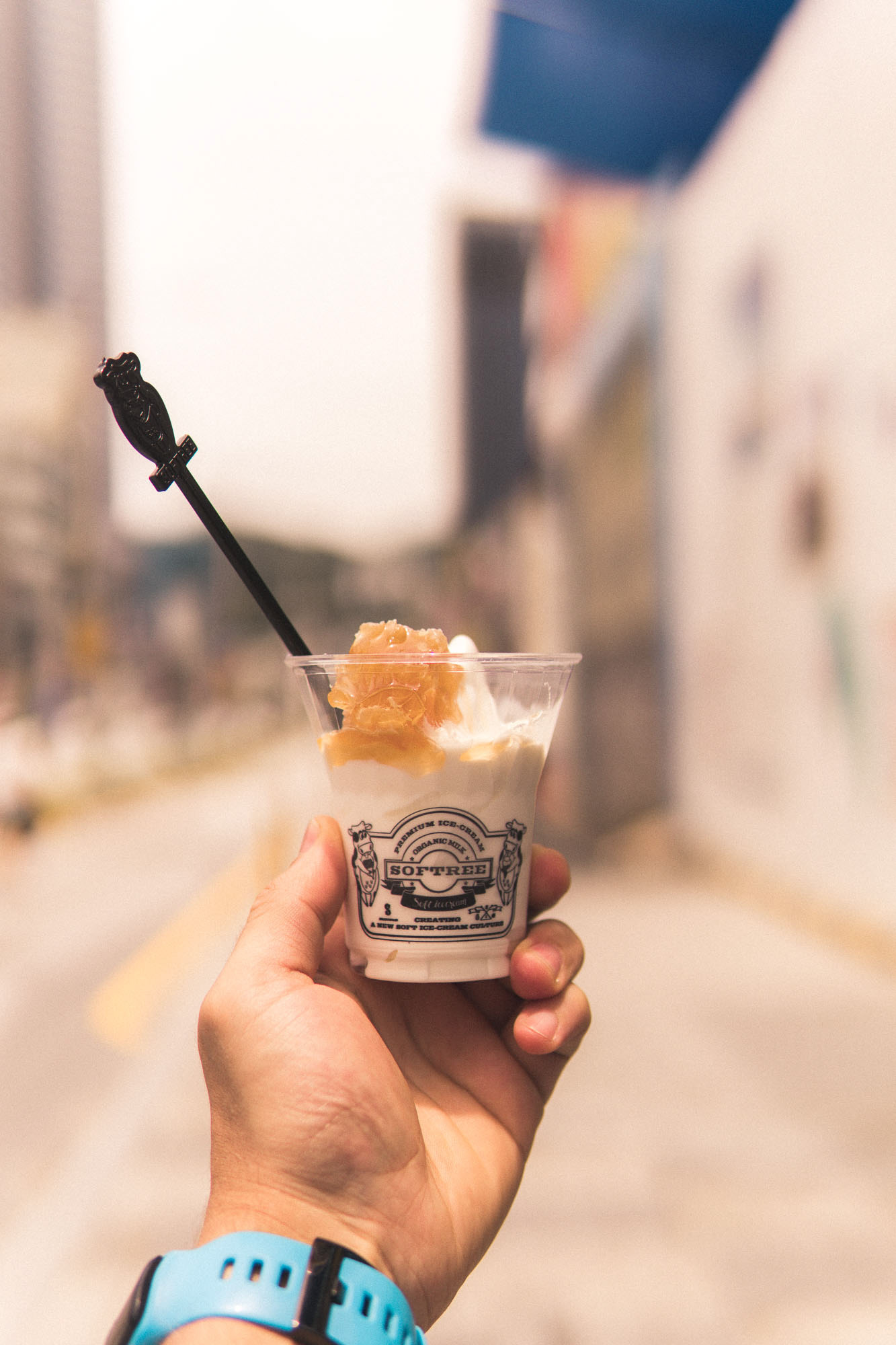 BENEATH THE CHERRY BLOSSOMS

SEOUL-SEARCHING ON SUMMER VACATION || PART 1
↑Back to Top

Insert copy here, which should vary depending on your region. Accept