Five of the most charming South Korean towns.

Go beyond Seoul and Busan for the best of South Korea.

Five of the most charming South Korean towns.

Go beyond Seoul and Busan for the best of South Korea.

Ask anyone which city they associate with South Korea and invariably their answer will either be Seoul or Busan.
Fair play, these are the two biggest conurbations in this country of 51 million people, but the way Korea is designed is that there is within each province is a sprawling network of smaller towns and cities, all connected either by rail or highway. This means that you can get to almost any point in the country with relative ease and moreover, that there are lots of different attractions beyond just the two household-name cities.
Download a free wallpaper pack
Wando, the town where I’m based, is about 5 hours from Seoul and 6 hours from Busan. It’s essentially the southern-most point of the country before you get to Jeju. This precludes me from visiting those two aforementioned metropolises as much as I’d like. As a result, I’ve had to settle for visiting cities that are much closer to me; places which you probably won’t find on a tourist brochure or strewn over the interwebs. And that’s nice, because you can be sure that these places have an authentic Korean feel to them. With that said, I want to share with you my five most-visited cities here in South Korea and exactly what makes them so special.
1. Gwangju
The city that I’ve visited the most in my two years here in SK has to be Gwangju. The capital of my province and home to some of the best food in the country (apparently).
I’ll never forget seeing Gwangju come into view after cycling 200km in my first two-wheeled expedition along the Four Rivers trail. Even though Korean towns all largely look the same, I’ve come to appreciate the variety that Gwangju offers in terms of nightlife, aesthetics and food. At only about a million residents strong, it’s nowhere near as vast and overwhelming as Seoul or Busan, but it still has that bustling city vibe, which I absolutely love. Even though the two-hour bus ride has become the bane of my existence, Gwangju has become something of a default destination for meeting friends or planning a night out.

Yangrim-dong: Coffee. Are you a caffeine fiend with a penchant for aesthetics? Take your pick from any of the coffee shops that line the Yangrim-dong streets. My favourite is 6K Coffee, an independent coffee outlet that does a killer coconut coffee.
Dong-myeongdong: Food. You can choose from Korean, Japanese, Western, Oriental, Italian in this aesthetically pleasing district. It’s become my go-to when I feel like indulging in wholesome eats.
Chungjang-ro: Shopping. This is where I buy most of my clothes from, as it’s where most of the shopping streets can be found. Prices aren’t bad and there’s a good mix of boutique stores and big chains. The quintessential South Korean downtown district.
1913 Songjeong Market: Beer. I can’t quite attest to this but apparently there’s a solid selection of craft beer here. And if the craft beer doesn’t take your fancy, then you can be sure that there’s more than enough food to keep you satisfied. I’ve only been here once because this market is located on the western outskirts of the city which makes it a bit remote, but it’s definitely worth checking out if you want something a little different to your typical Korean downtown experience. If you're looking for a market closer to Downtown then I highly recommend Daein Market, as they occasionally host 'world' markets where vendors sell different foods from around the world.
(I am planning to do a full Gwangju city guide, so do sign up for my mailing list if that's something you're interested in.
2. Damyang
About 30 minutes from Gwangju is Damyang, a rural town nestled along the banks of the Yeongsan River. It’s an awesome little city escape and especially pretty in the shoulder seasons. I recently flew my drone along Metasequoia-lined Avenue, one of the main attractions here. There’s also the Juknokwon (Bamboo Forest) and the accompanying Bamboo Museum.
Damyang is just so serene and laid-back, it feels like a good example of what the countryside should be like.
3. Yeosu
After landing at Incheon in April 2018, Yeosu was my first real taste of South Korea as this was where our teacher orientation was held. Yeosu is somewhere between a town and a city, spread out but quaint in parts, especially along Isunsingwangjangro (try saying that after a bottle of soju). It’s got a lively enough downtown district in the Yeoseo-dong area and the pojang matcha stands in Jinnamgwan are outdoor Korean dining done at its finest, but my favourite pastime here is frequenting the cafes nestled up on the hills that overlook the Dolsan Bridge and the cable car.
Cascading along the Yeosu slopes with their colourful murals, this area resembles the Rio favelas, albeit a lot more upmarket. Just be warned though, because the town is so spread out, taxis can get very pricey, very quickly. I absolutely love Yeosu for a seaside getaway. And at 4 hours, this is one of the closer towns (no jokes!).
4. Jeonju
Even though I haven’t managed to visit Jeonju lately, this city also stands out as it was my first cultural visit on my orientation. The Hanok Village is synonymous with Jeonju, and for good reason. It’s the quintessential Korean experience, and nothing beats a relaxed stroll around this cultural wonderland. Look hard enough and you’ll find some awesome hideaways here too, craft beer bars, foreign restaurants and the like.

Not the Hanok Village, but Jeonju downtown instead.

5. Jinhae
I’ve only ever been to Jinhae once in my time here, but once was all I needed. Every April, this little town springs into life (you'll have to let that pun slide) with cherry blossoms creating a blanket of bright pink along the stream near the Gyeonghwa train station. Crowds flock here for the photo opportunities and even though it can feel a little kitsch (would it be South Korean if it wasn’t?), it’s a stunning natural phenomenon that everyone should experience. 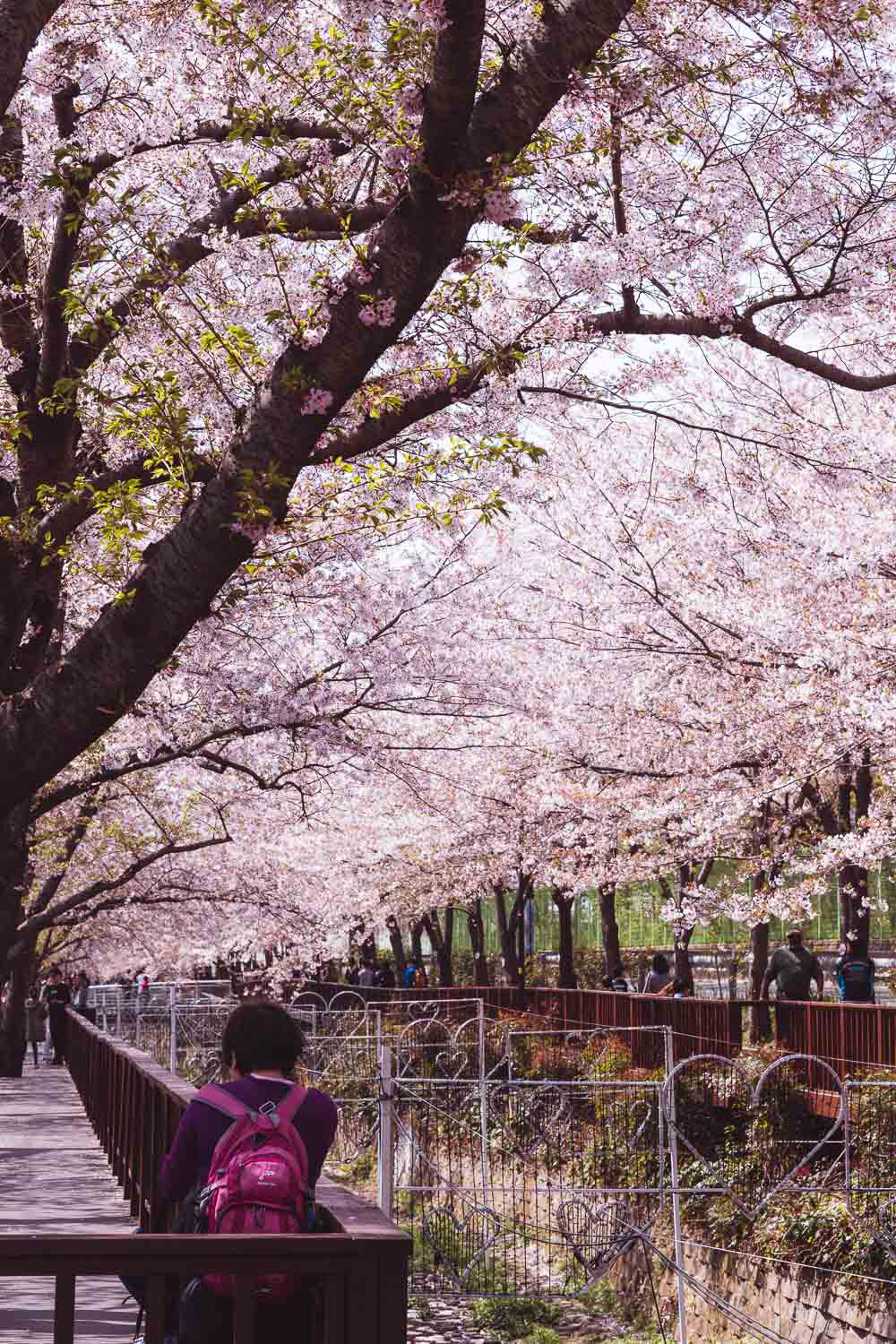 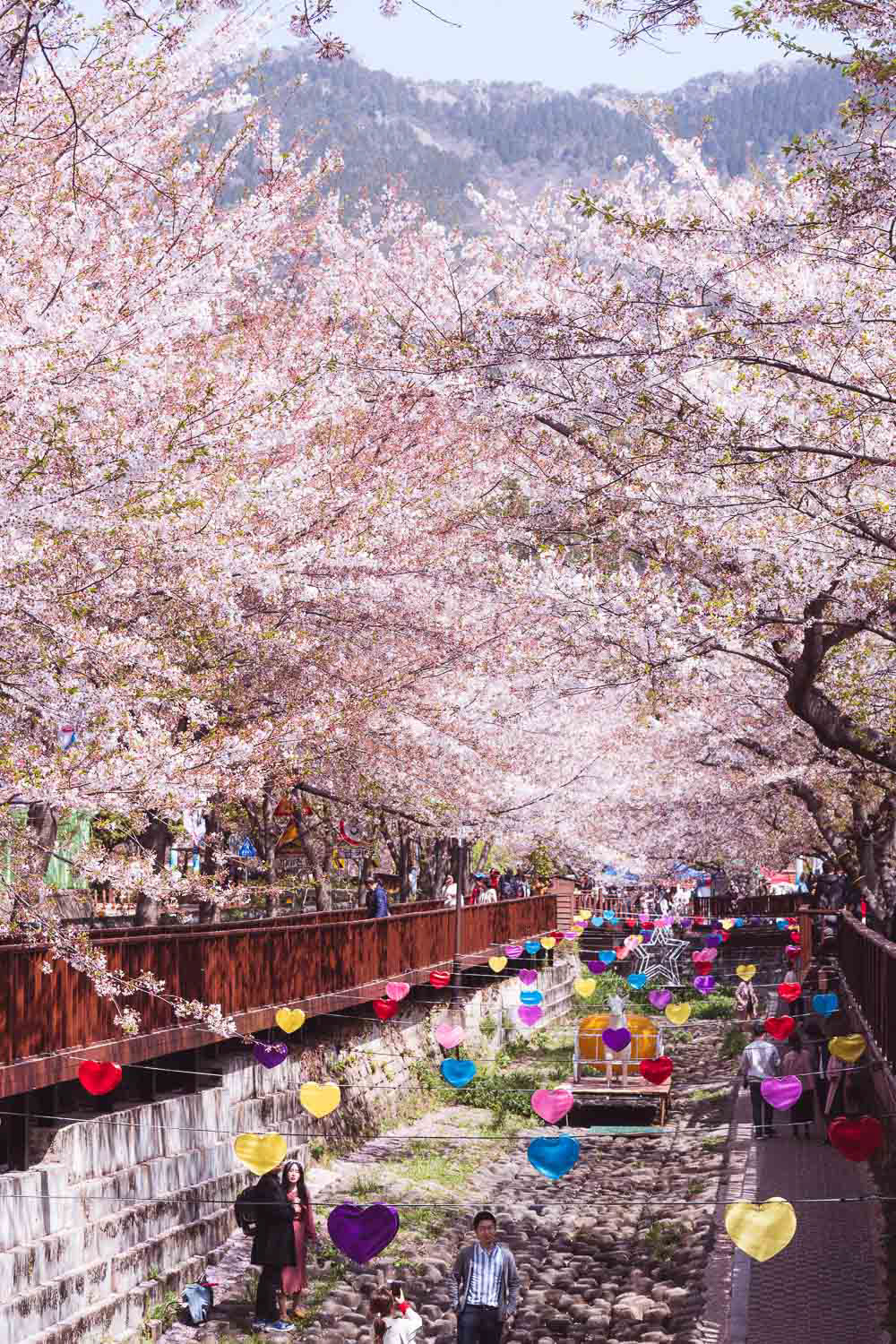 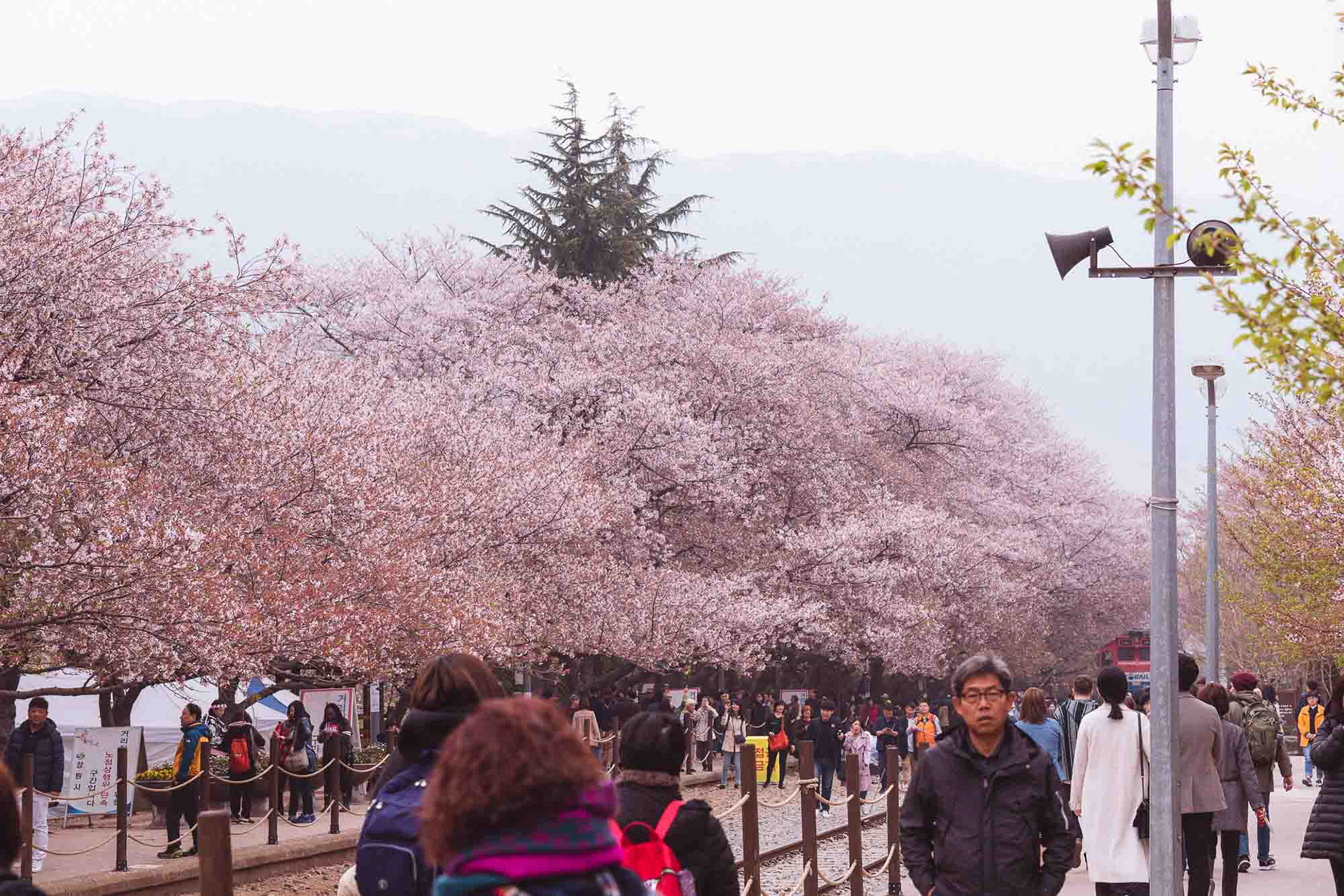 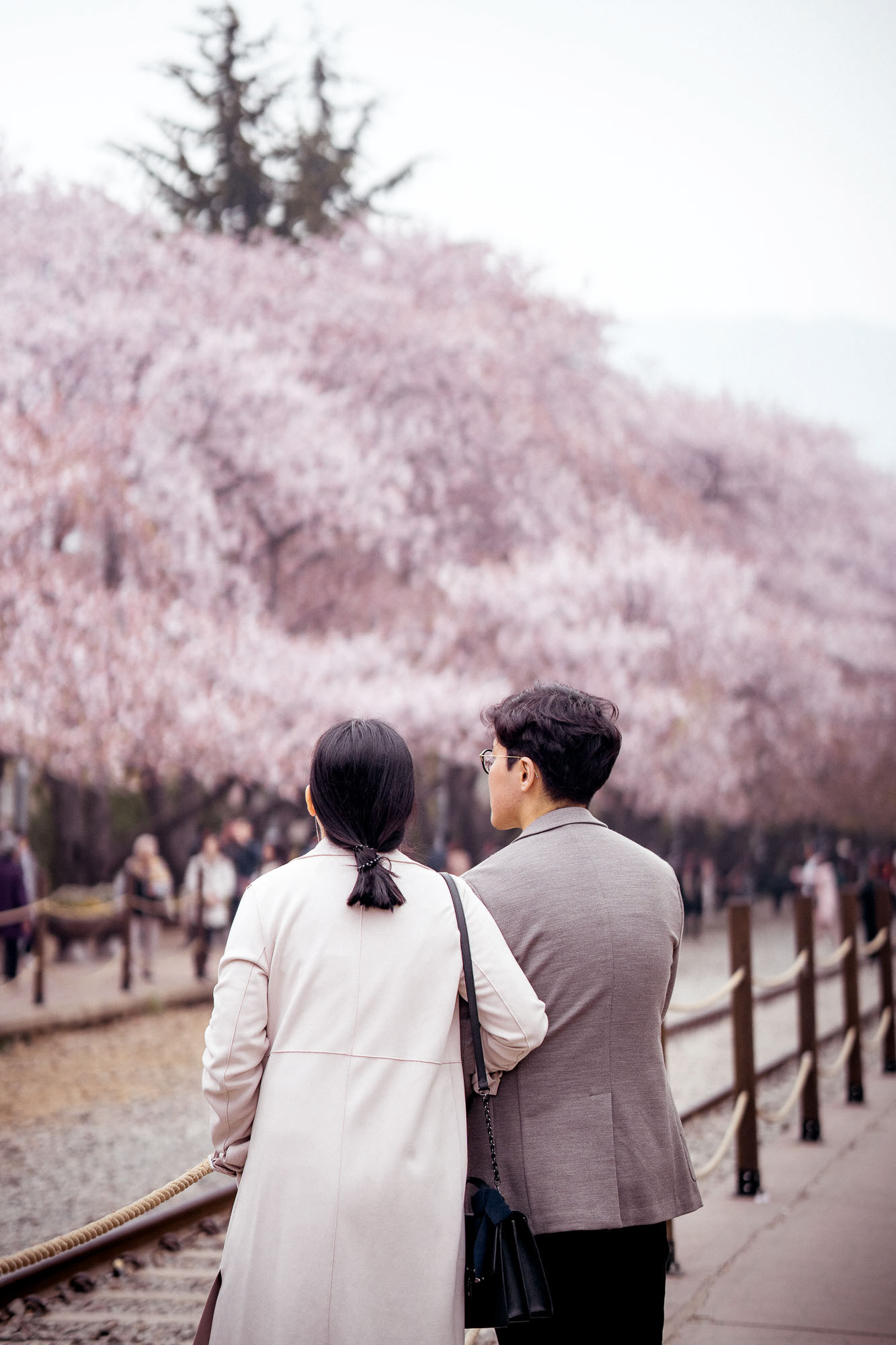 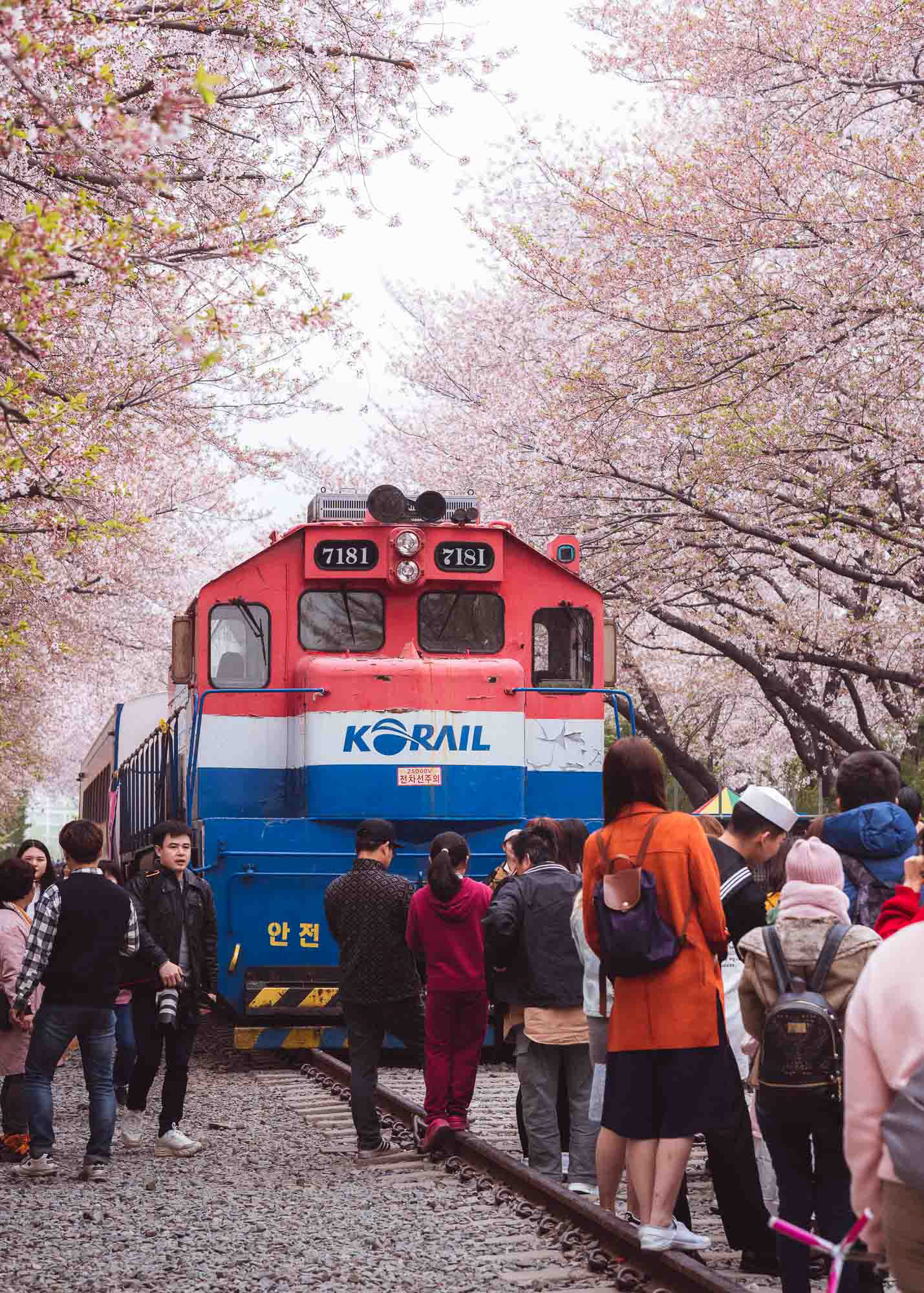 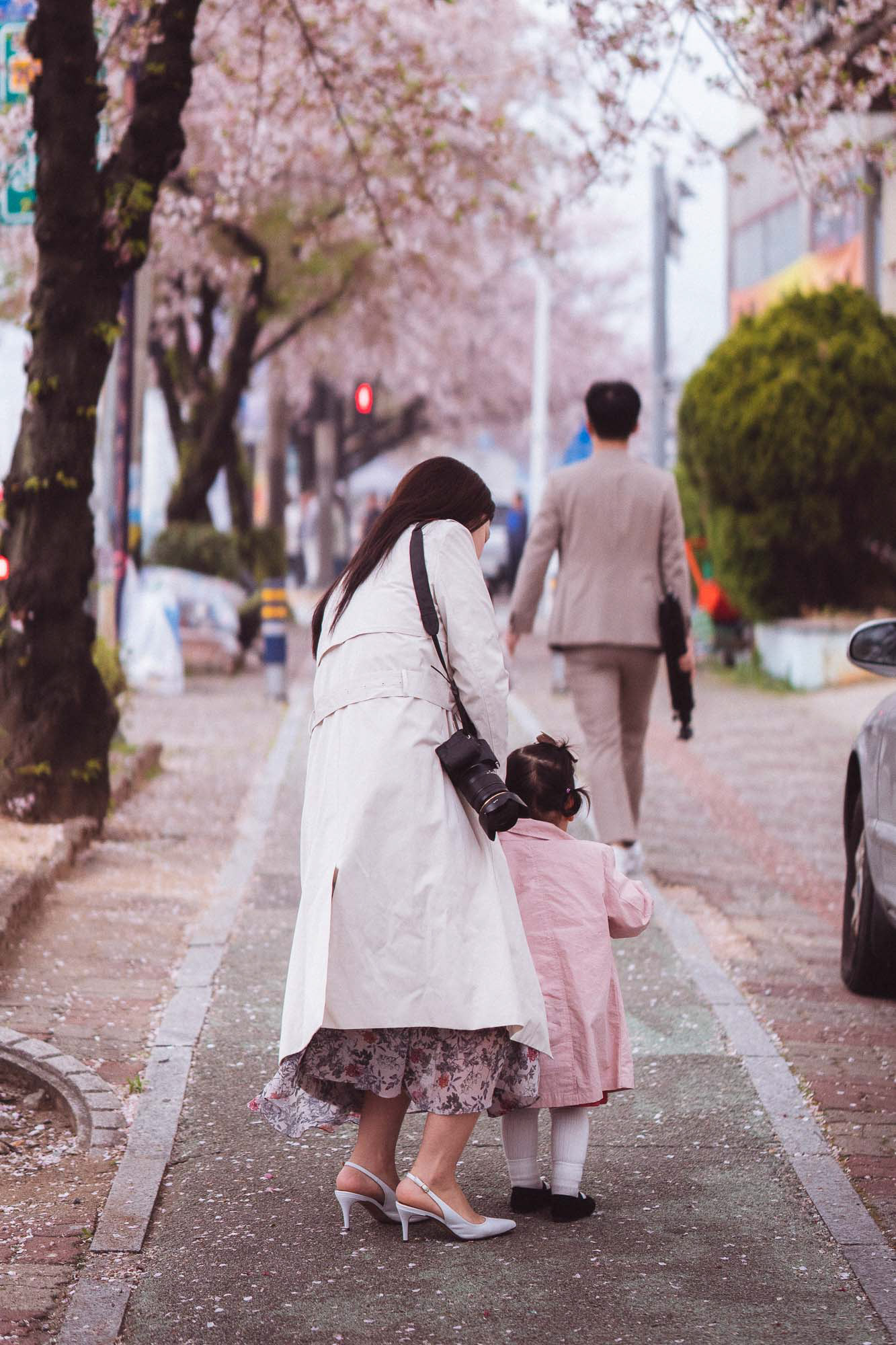 Which have been your favourite travel destinations of 2019? Let me know on Instagram or Twitter.
If you enjoyed this article, sign up for monthly updates as I post travelogues about my trips throughout East and South East Asia, along with videos around street and travel photography.

JINHAE
↑Back to Top